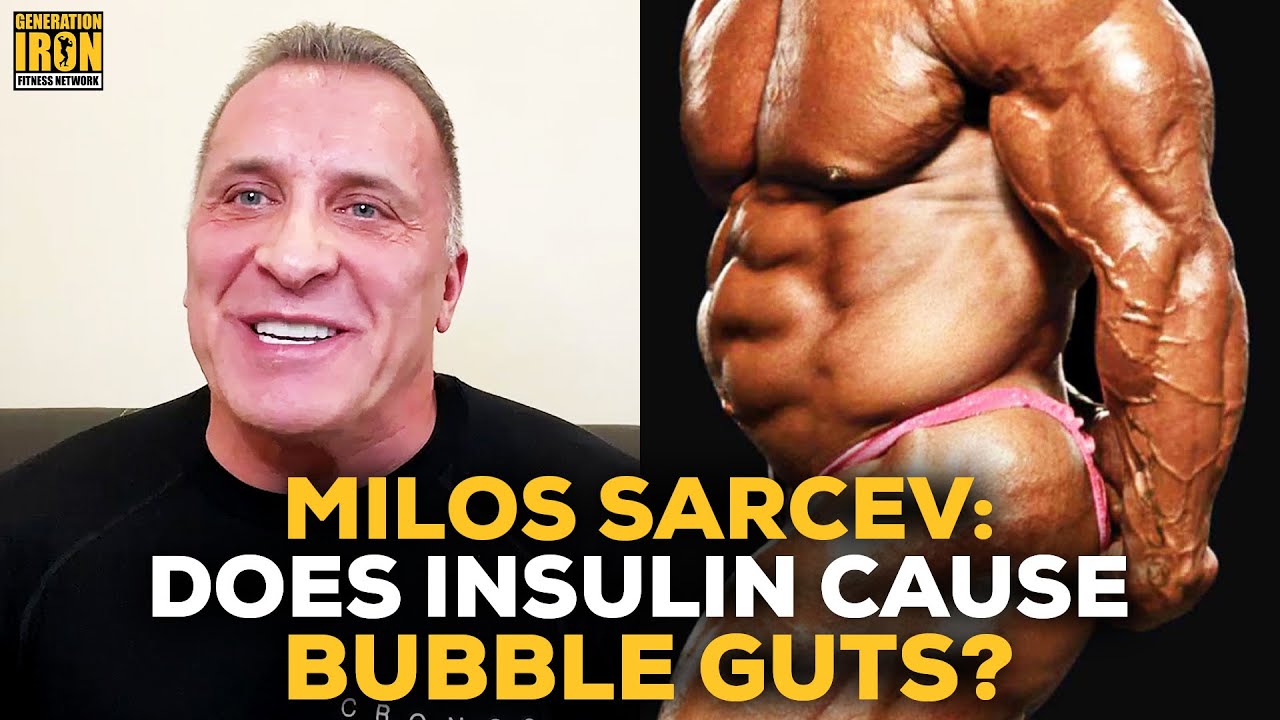 One of the biggest critiques of the current era of bodybuilding is the prevalence of bubble guts. Pro bodybuilders, even on the Olympia stage, repeatedly showcase distended stomachs during posing routines. The midsection should be tight and sucked in at all times. This past decade or so that has been far from the case for many athletes. Many people have blamed insulin as the cause for this phenomenon. But is it true? In our latest GI Exclusive interview, Milos Sarcev answers whether or not insulin causes the bubble gut problem in bodybuilding.

Milos Sarcev is known as the man who introduced insulin to bodybuilding. So there’s no better man to talk to about bubble guts and insulin than Milos. Over the past decade, insulin has bee deemed the main cause in the rise of bubble cuts in bodybuilding. Defenders of the drug often site that this is far from the truth. They believe that it’s overeating that causes the stomachs. In an era of mass monsters trying to push near 300 pounds – this is inevitable. So what’s the truth? Is it insulin, overeating, or perhaps a little of both?

Milos Sarcev’s overall answer is that insulin does not cause bubble guts. It’s most likely not the cause for majority of the distended stomachs that appear on the bodybuilding stage. He does admit that if insulin is used wrong or at the wrong times – it can have a big impact on bloated stomachs or bubble guts.

Using insulin correctly vs incorrectly ultimately is the big talking point for Milos Sarcev. He has consistently warned of how detailed an athlete needs to be if he should choose to use insulin. This is what ultimately makes the drug so controversial. It truly is dangerous if done incorrectly. The big question becomes – is it too easy to make a mistake to be safely used in sports like bodybuilding?

Milos Sarcev himself describes injecting insulin as “poison” and that a user then needs an antidote. The antidote is having the correct amount of carbohydrates to balance everything out effectively.

So ultimately, it seems that insulin is at least in some small part a reason for bubble guts. It’s not the only reason though. It’s one factor among many that seems to have become more commonplace in today’s bodybuilders.

With the introduction of the Classic Physique division and constant criticism of bloated stomachs – it’s likely this trend will soon disappear from the sport for now. Until then – we will likely continue to debate what the true cause is for this phenomenon.

You can watch Milos Sarcev’s full comments about insulin and bubble guts in our GI Exclusive interview segment above!

Be sure to subscribe to receive updates from the GI Fitness Network:
http://www.youtube.com/subscription_c…

Watch all our original films: https://generationiron.com/category/watch/original-docs/

Subscribe to Generation Iron Plus for scientific and professionally designed training, nutrition, and Becoming A Pro: https://generationironplus.com/

Also make sure to hit up our official Instagram:
https://www.instagram.com/generationiron/