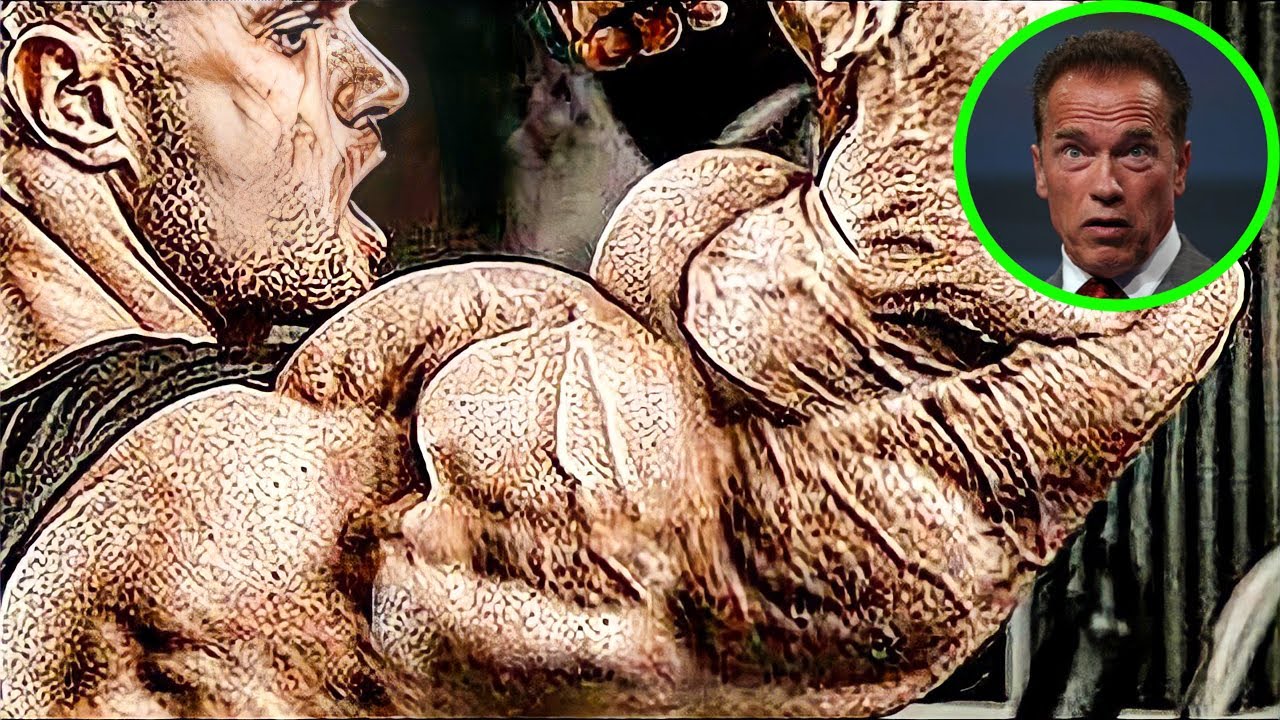 Number 10. Leroy Colbert
Born in 1933 in New York, Leroy Colbert is credited as the first man to develop defined 21-inch biceps (21-inches and a quarter to be exact). He is also known for pioneering a handful of now-infamous training techniques. His most significant contribution is as the inventor of the now-infamous 21s curls — where you perform seven curls from the bottom to halfway up, seven curls from your chest to halfway down, and then seven full curls. He also standardized training the arms in alternating fashion — biceps, triceps, and biceps — which is commonplace in physique sports.
Notably, Colbert is also credited with being the first black man to be featured on the cover of Muscle Power magazine. Colbert’s competitive resume doesn’t carry as much weight as some of the other names in today’s video, but he won Mr. New York City in 1952 and Mr. Eastern America in 1953. Colbert passed away in 2015 at the age of 82.

Number 9. Larry Scott
Many men can claim the title of Mr. Olympia, but only Larry Scott can say he was the first. The 1965 and 1966 Olympia champion boasted a well-rounded physique, but his arms were by far his most lauded body part.
The preacher curl is also known as the “Scott Curl” because bodybuilding historians recognize him as the first to perform curls for the biceps with the upper arm placed against a pad or bench. His triceps were very well developed, but they weren’t as famous as his peaking biceps.

Number 8. Sergio Oliva
Sergio Oliva is the subject of what may be one of the most famous images in bodybuilding history. The photo depicts the three-time Mr. Olympia standing next to a pool table, donning a fedora and tapered polo with a zebra-print collar. Oliva is gripping a pool cue in a GQ-esque pose. His arms bulging through his shirt and covering almost the entirety of his torso. By today’s standard — nearly 50 years after the photo was snapped — the size of Oliva’s arms is still shocking.
Whether Oliva was performing his signature “victory pose” — in which he flexed both of his arms overhead — or assumed a standard front double biceps, Oliva’s arms were gawked at by both fans and rivals. Even Arnold Schwarzenegger, Oliva’s greatest adversary, has admitted to being intimidated by the sheer size of the Cuban.

Number 7. Arnold Schwarzenegger
Seven-time Mr. Olympia Arnold Schwarzenegger is the most recognizable name in the sport’s history thanks to his dominant reign on stage and his successful movie career and stint as the Governor of California. As a competitor, Schwarzenegger was known for his full chest and his biceps, which formed a mountainous shape when flexed (known as a peak).
The Governator isn’t shy about sharing his secrets to success. In his book “Arnold Schwarzenegger’s New Encyclopedia of Modern Bodybuilding,” he wrote that focusing on the muscles instead of the weights was key for building his massive arms. “When you think about the weight instead of the muscle, you can’t really feel what the muscle is doing. You lose control,” Schwarzenegger wrote. “So you end up not working to the limits of your range of motion, not contracting and extending the muscle in a smooth, intense, controlled manner.” Two of the former California Governor’s favorite exercises were the classic barbell curl for the biceps and the kneeling cable triceps extensions for the back of the arm. He used this same philosophy when performing these exercises. “Because I am thinking about the muscle, I can feel everything that is happening to it.”

Number 6. Lou Ferrigno
When Schwarzenegger was the king of bodybuilding, no one thought he could be outsized. Then Lou Ferrigno came along. The former Mr. Universe winner was three inches taller (6’5″ to Schwarzenegger’s stature of 6’2″), and every muscle group was as big or bigger.
Ferrigno’s biceps were impressive, but it was his triceps that made his arms look like he was from another planet. They were round and detailed with visible muscle fibers. Ferrigno wasn’t all show, either. He went on to compete in the first World’s Strongest Man contest. Ferrigno never beat Schwarzenegger on stage, and he didn’t win the Olympia. However, his arms are one reason why he is still regarded as a bodybuilding legend.