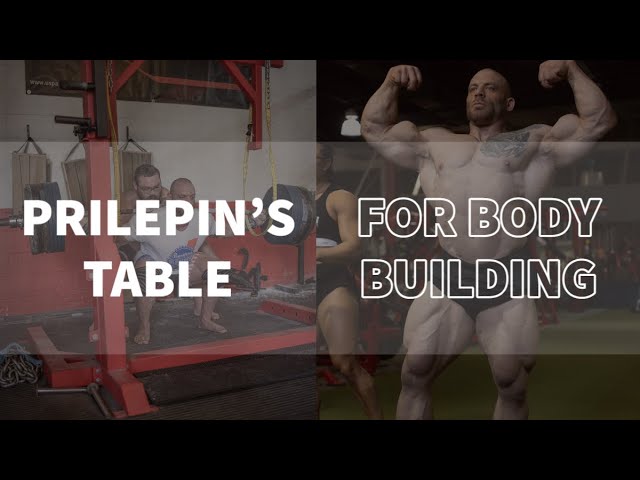 — The first column lists the various percentages of 1RM you might be working with.
— The second column shows how many reps you should be performing per set (based on that percentage of 1RM).
— The third and fourth columns list the total number of working reps you should shoot for (again, based on that percentage of 1RM). The third column is the “optimal” total, but the fourth shows a range – because obviously, on some days you’ll feel better than others, so you can adjust your training volume accordingly on those days.

Here’s the cool thing: you don’t have to know your 1RM in order to apply Prilepin’s ideas to bodybuilding. You can extrapolate by using a relative intensity chart.

Relative Intensity chart can serve as a great resource with Prilepin's chart to properly assign volume and intensity for athletes training. Having an understanding of what the effort & load assigned for the day can allow for effective long-term planning @SPNetwork pic.twitter.com/sMMbcTXnjf

This chart shows how rep ranges correlate to percentages of estimated 1RMs. If we plug those ranges into Prilepin’s table, we get something like this:

The next step is to look at the number of reps per set. Obviously, sets of 1-6 reps aren’t sufficient for hypertrophy. So instead of looking at total reps, we’re going to use effective reps. Effective reps are the hard ones at the end of the set, where you really have to dig deep to keep good technique and still continue to crank out reps. (Good technique is key here – if you’re sacrificing technique to get out more reps, those aren’t effective at building muscle).

When we use effective reps in Prilepin’s table, the big picture starts to make sense.

The idea is simple: in a set of 12-15 reps, for example, about 3-6 of those reps will be hard, effective reps. For whatever movement you’re training, you want to do enough sets until you get to about 12-18 effective reps. Then you can go on to the next movement.

Now, there are a few key points to using this method:
— You’re doing a high number of reps and sets per movement, so you don’t want to use a lot of different movements per bodypart. Two or three is plenty.
— As you perform multiple sets, you might fall outside of your target rep range. That’s fine – you don’t have to get it perfect. Close enough will do the job just fine.
— You’ll need to pace yourself to keep your number of effective reps per set in the indicated ranges. If you fall outside of that, take a bit more rest before your next set.

The last thing to note: this isn’t a full training method. Instead, it’s a method of adjusting your volume during a session to make sure you’re maximizing your training results without having to spend hours figuring out the exact number of sets and reps to perform week in and week out.

Need help finding a program? Check these out: http://peakhd.net/p/programs